The Corgi Engine is a Unity 2D + 2.5D Platformer Kit, available on the Unity Asset Store.
It's a very fast, single or local multiplayer non-physics based engine, packed with features, described below. It's mobile friendly, works well with other assets, and is basically everything you need to start creating your own 2D game right now.

The Corgi Engine is recommended by Unity as part of its 2D Essentials Pack.

Wanna give it a try ?
Check out the demo!

This page contains an exhaustive list of all features included in the Corgi Engine, as well as FAQ, a changelog, and a roadmap of coming updates.

You can start by having a look at the functional documentation, which covers all aspects of the engine. There's also a complete documentation for all classes, which are all heavily commented, so it's very easy to understand and improve on as long as you have basic Unity understanding. If you don't want to get into code, there's still a lot you can do in the inspector or simply by replacing assets! It's now super fast to create your own game! There are also video tutorials to get you started.

And for a quick look at how it works, and how you can use it to achieve great things, you can look at this tutorial series by the great people at Unity themselves.

The character controller is easy to control and tweak via the inspector. For those of you wondering, the Player/platforms collision detection is made using raycasts, it's not a physics based engine, although you can mix some physics with it, as you can see in the demo (the crates for example).

For each of the player's feature, you'll find a dedicated animation. The Corgi Engine uses Mecanim's powerful state machine and blend trees so you can easily replace our little corgi with your own character and animate it. The asset includes spritesheets animations, animated meshes and Spine powered animations. And of course the engine can work with any animation mode you prefer, and comes with helpers to automate animation parameter setup.

The Corgi Engine lets you create both 2D and 2.5D games. In that context, 2.5D means 2D gameplay with 3D assets. You'll find example of both setups throughout the demos provided with the engine.

The asset comes complete with more than more than 60 demo levels, a splash screen, a start screen, and a loading screen so you can understand how to link your GUI screens and levels together. Don't hesitate to check out the demos to give them a try!

The engine will let you create in many ways, either carefully handcrafted, or procedurally generated (there are examples of that too), everything's possible!

Since v4.2, the Corgi Engine allows you to set a specific gravity direction, per character. Unique to the Corgi Engine, this feature opens a whole world of possibilities. Whether it's constant altered gravity, or only in specific zones, or around certain points, the choice is yours. And it's not just "reversed gravity", it's free, 360°, and entirely up to you. You can even use an ability to dynamically change gravity direction based on the current slope angle. Most features of the engine will keep working in altered gravity, from weapons to jumpers, so you can now turn your world around however you want.

Create teleporters to move quickly from point A to point B. You can also create portals through which you can move, shoot, or throw enemies.

Although the Corgi Engine is raycast based, and independent from Unity's Physics 2D, you can still interact with it to some extent (not recommended for physics heavy interactions, non flat pushing, chain reactions, etc). Since v1.6, you can now push blocks, platforms, etc, have them fall down or hit each other.

Additionally, since v2.1, you can now simulate slippery or sticky surfaces, or add stuff like treadmills or trampolines to your levels, and v5.2 introduced pushing and pulling other CorgiControllers.

new in v5.0 Take your enemies and friends to the next level using the Corgi Engine's Advanced AI system. Combine actions and decisions super easily via the inspector to create complex behaviours for your characters.

Game feel in games is super important. Whether it’s visual feedback, haptic vibrations, sound, or anything else, feedback is the sum of things that happen whenever something happens, in general or in reaction to the player’s input. This will ensure the player always understands the consequences of their actions.

The Corgi Engine is built with that in mind at all levels, and comes with the MMFeedabcks built in at its core, and prefabs you can use to improve the general feeling of your game : screen shake manager, flashes, damage texts, time management to slow down / speed up time or add freeze frames, animated healthbars, shader control, explosions, VFX and SFX integration on all abilities, knockback, everything you need to step up the feeling of your game is built-in!

The asset includes a complete documentation for all classes, plus each class is heavily commented, so it's very easy to understand and improve on as long as you have basic Unity understanding. If you don't want to get into code, there's still a lot you can do in the inspector or simply by replacing assets! It's now super fast to create your own game! There are also video tutorials to get you started. 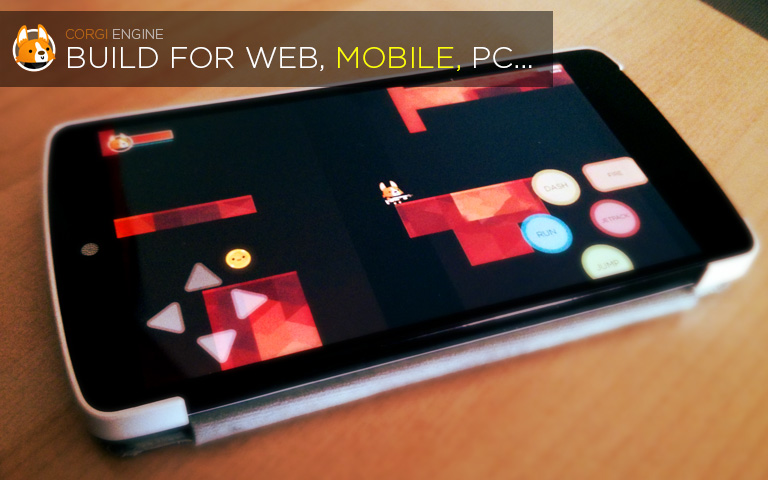 You can use this asset to create games that run on anything you like. The asset comes with input management and preconfigured controls for keyboard, xbox360 pad, and mobile (iOS or android - and probably anything with a touchscreen). It natively supports the regular input system, as well as the "new" input system package. You can enable, force or disable mobile inputs easily via the Unity editor. The engine will even autoactivate mobile controls based on your build target.
Since v2.2, the engine relies on homemade, simple by design, mobile controls (buttons, joysticks, swipe zones, repositionable sticks, etc). They're fast, repurposeable, and reliable. Feel free to replace them with better ones.
You can get a tech demo on the Play Store to have an idea of how it runs.

You can now control time! The game comes with a pause system and methods to speed up or slow down time!

The asset comes with a lot of particle effects that work great in 2D, such as jetpack flames, projectiles, explosions, etc... Use them as they are in your own game, or customize them by tweaking their parameters and materials.

The Corgi Engine is fully compatible with Esoteric Software's amazing animation software Spine. Since v1.5, the asset includes many Spine powered characters. Feel free to add your own!

The asset comes packed with tons of ready to use UI elements. From start and pause screens to healthbars, avatars, and even mobile controls. It's easier to use and customize, and works well on all screen sizes. There's even a level selection carousel and a Mario like map.

Will there be updates? Will they be free?

Yes, updates are released very regularly.
All Corgi Engine updates have always been free, and always will be.

All music files included in this asset are © Uniform Motion and for demo purposes only, you can't reuse them. You can't redistribute the code or any of the content of the asset.

Apart from that, feel free to use all code and visual assets included in the asset in your games.

Click here to give the HTML5 demo a try.

The Corgi Engine can be used on all platforms Unity runs on. Don't hesitate to try the many demo levels included in the engine :

Note that for package size and validation reasons the iOS and Android demos only showcase a tiny selection of the 60+ demos included in the engine.